Now for the main event. We burnt a lot of time and energy trying to make a new art piece for this years burn. 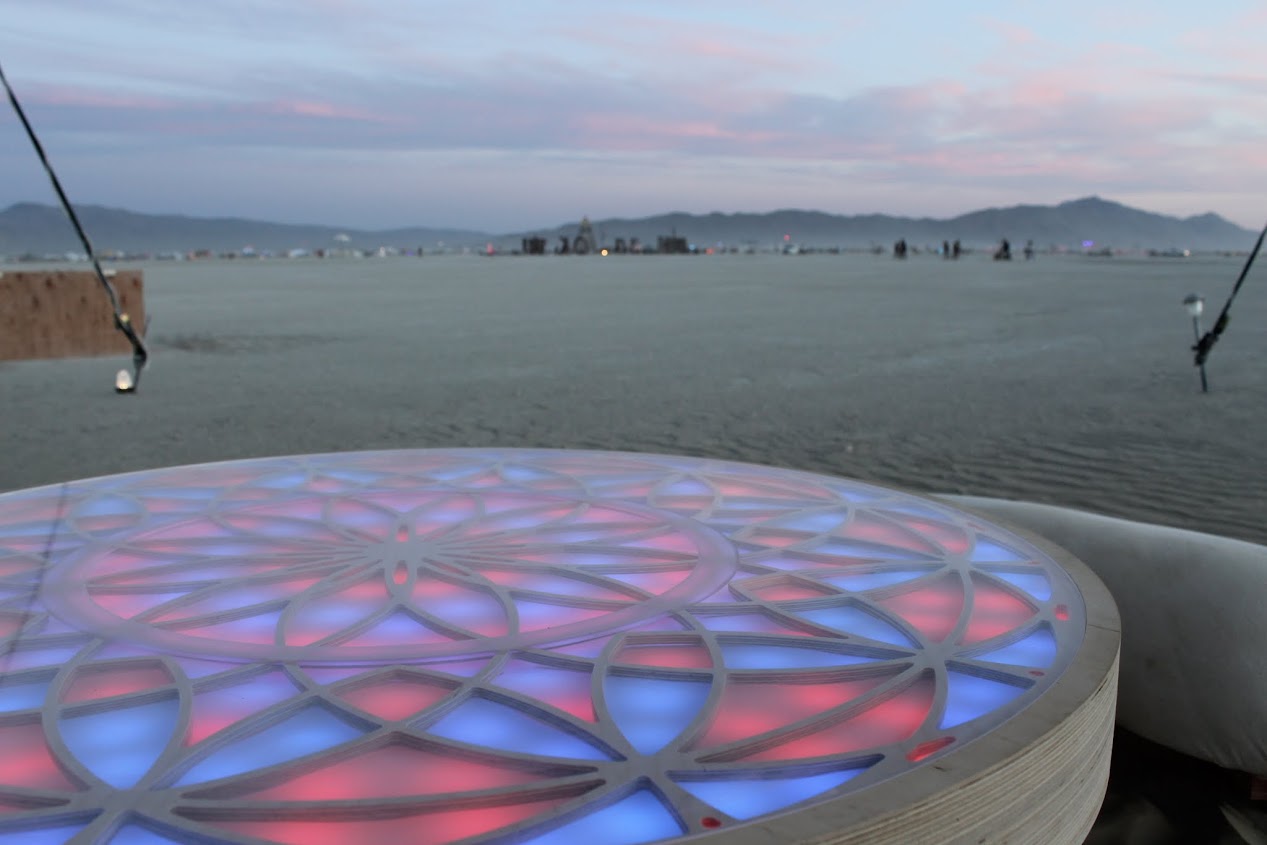 We’re calling it Zen Ball, but really its now more of a Zen Table. The original concept for a glowing table at which two participants sit wearing EEG headsets. On the surface of the table would be two large steel balls that roll around in a groove on the table top. As participants reach a state of calm the EEG headsets would pick this up and begin to move the balls around the table. Each player having a ball mapped to their own internal zen state.

This opened up some interesting opportunities for interaction. As the balls moved, would you become more easily distracted? If your state of zen out performs your partners, will you crash into their ball and end the sequence? When the two players were in sync with each other, achieving the same level of mental clarity then the balls would move around the table in the same direciton at the same speed, resulting in a yin/yang symbol appearing in the glowing surface between them.

All this sounded great, and we put many hours into trying to make this happen. We probably bit off more than we could chew though and found ourselves still sanding wood a couple of days before the burn. We finally got it all together the night before we left, which left me a few scant hours to throw together some animations and to test the mechanism out. Sadly the motors we had didn’t provide enough torque to shift the heavy 10lb steel balls around the table using the 300lb pull force magnets. The balls would move halfway around the table then get stuck and we would stall out the stepper motors driving the whole thing. 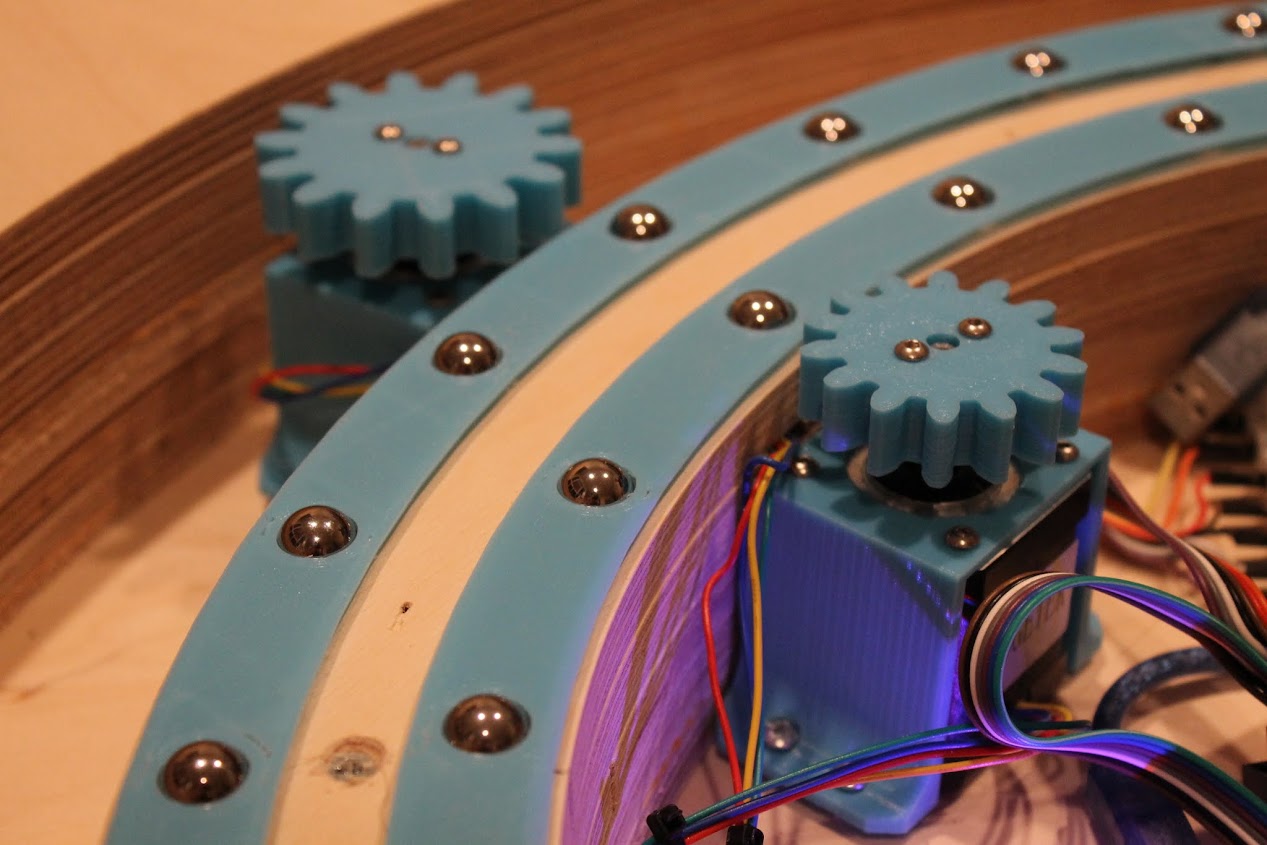 So we had to make the best of it, and we brought the table out anyway with just the glowing surface and no EEG setup. It was however quite beautiful and we found many a happy group lost at the table staring at the hundreds of LEDs below the surface. To finish the piece off we made two kidney shaped stools for people to sit on either side of the table, and our friend Yariv put together a fantastic shade structure to provide some shade for the piece during the day. We met many interesting people under that shade! 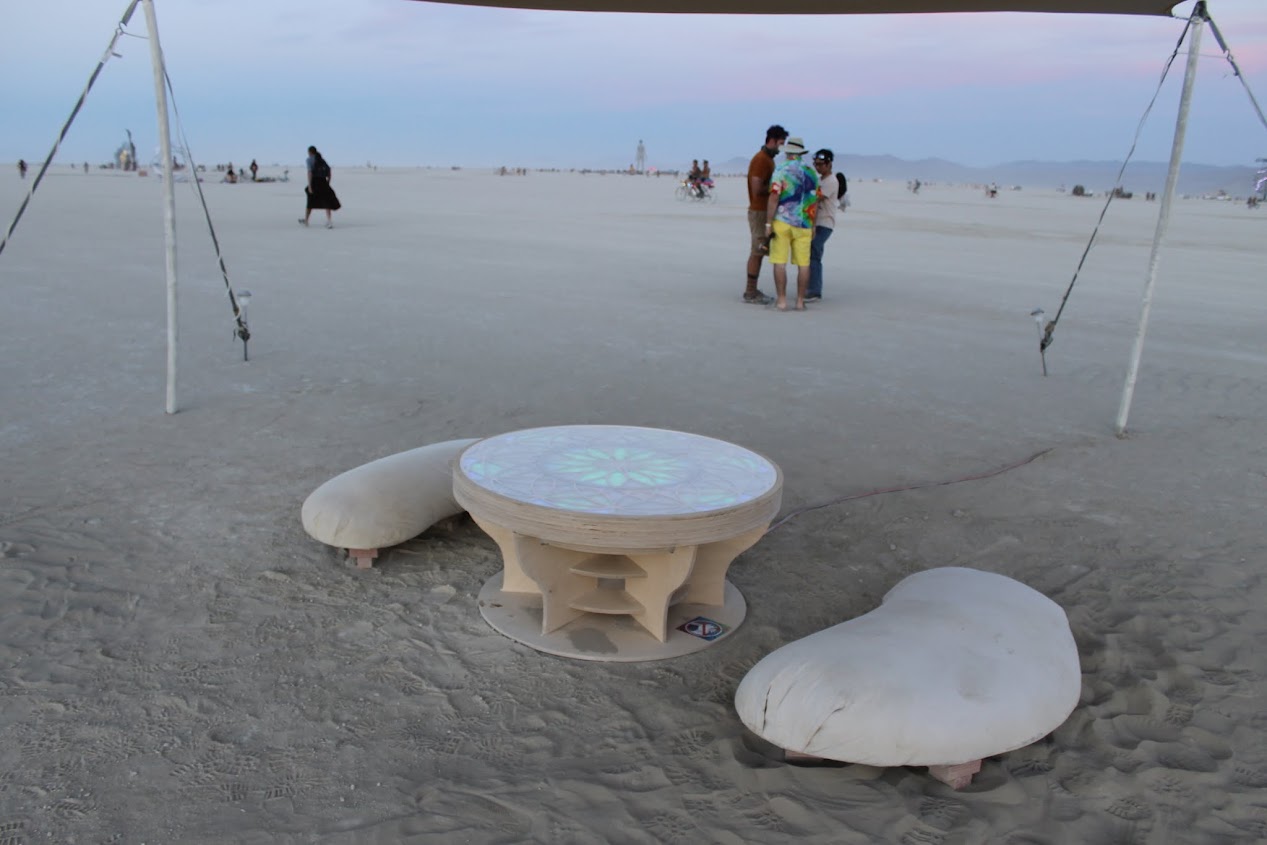 Many thanks to Yariv Keinan for putting together the shade structure, Ryan Daily for the use of his fantastic 4x4 Laguna Swift CNC machine, Scoops and Ginko for help during the build, Paul Ashford and Eugene Kim for helping with setup and teardown of the piece on the playa, and of course my lovely wife Jasmine for the many many many hours of sanding she put in trying to make the damn thing smooth!

Here’s a few videos we managed to take of the piece (yes we actually remembered to take video this time!), and there’s a gallery of build photos further down the page too. Enjoy!